Best gate latches that allow locking from either side

Keeping your home secure isn't just for what's in your home, but for what’s in your backyard, too. People keep lawn mowers, bicycles, boats, leaf blowers, and any number of high dollar items in their yard, and they demand just as much protection from outsiders than any valuables in your home. Plus there is comfort in securing the backyard from nosy neighbors, kids who don’t know their boundaries, and anyone else who thinks they want to go into your private space. You may have a fenced-in yard with a gate, but it’s only secure if you lock the latch.

Many gate latches allow locking on only one side of the gate, making it inconvenient to unlock if you find yourself starting on the wrong side to begin with. This inconvenience may cause someone not to lock their gate latch in the first place. The ideal solution would be to have a way to unlock the latch from either side. To do so, one needs the right security gate latch hardware.

We’ve searched through several gate latch options and fit this need and summarized the best two dual-sided lockable gate latches. These latches appear to perform the best based on several researched reviews. Both secure gate latch options are quite different in approach and cost, so look over them to find the one best for your unique needs. 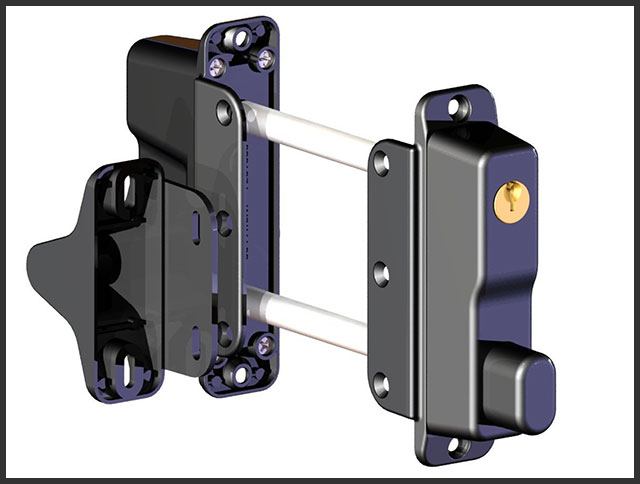 The Keystone Advantage double-sided keyed gate latch is one of the best options out there for securing a gate with a key that can be accessed and unlocked/locked from either side of the gate.

It doesn’t matter which way the gate opens, since the latch can be locked and unlocked from either side. This a quality product, features a stainless steel striker bar and mounting screws, as well as 4 keys supplied. This latch will fit gate posts ranging from 1.75 inches up to 5 inches, and the striker fits gate frames of 1.5 inches. As with any hardware, measure twice when installing, and it should operate smoothly.

Though the keys it comes with are quality compared to other gate latch lock systems, you may find that spending a bit more to have a locksmith set it to work with your existing house keys can make it that much more convenient. The cylinder is a 5-pin that can be rekeyed by most locksmiths as Schlage or Kwikset. This means no more extra keys on the keyring, or forgetting the gate key on a key hook inside, only have to have to make an extra trip. The best key is the one you have already on you, so this additional step makes the Keystone Advantage latch that much more of a favorable option.

Even without the locksmith involved, if you need to lock and unlock your gate from either side, the Keystong Advantage Double-Sided Keyed Gate Latch may be the answer. Feel secure with this locking mechanism on your gate. 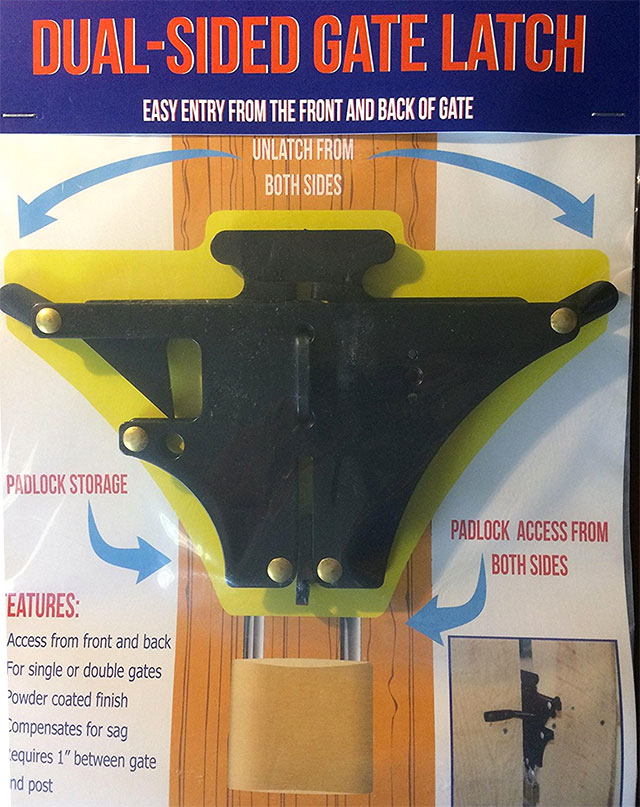 The Optimus Hardware dual sided gate latch a less expensive approach than the Keystone Advantage, as instead of treating your gate like a door to your home, instead it’s primary mechanism is allowing a padlock to be accessed from either side of the gate.

The locking point of the padlock can be swung in either direction of the gate, allowing it to be accessed and unlocked from either in front of or behind the gate. Levers are in both the front and back to allow unlatching conveniently from either side. Also, there is a hole for padlock storage available on front of the gate, allowing you to leave the gate unlocked temporarily for planned access by parties (such as a yard guy) that may not have a key to the padlock, but the way the padlock is placed makes it appear locked.

The latch also boasts an elongated mouth to allow the gate some fluctuation in gate position, as weather and frequent use of any gate inevitably warps and wears down gate alignment. So the elongated mouth allows the strike bar to have that room to move with needing constant adjustment.

Because the dual-sided gate latch requires a padlock to lock, you provide the padlock (it does not come with the package). When getting a padlock, choose a longer-shackle lock (such as this Brinks padlock), as it will need to stay centered in the gate but allow enough room when swivelling to comfortably access and unlock the padlock.

Easy installation, though for gates that have a small gap between the gate edge and the post, carving a notch is recommended to have room enough storage space for the padlock.

Keeping our home secure involves all property, including outdoor areas accessible by gates. Being able lock those gates, while also able to unlock and unlatch them conveniently from either side, will make your outdoor areas better protected. Consider the above latches when looking to completely secure your home.